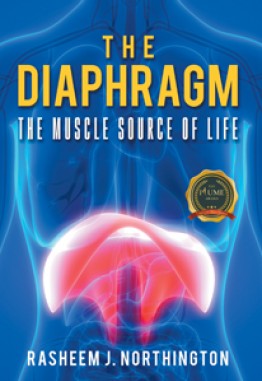 The Diaphragm: The Muscle Source of Life

THE DIAPHRAGM- The Muscle Source of Life is about the significant role of our muscular thoracic diaphragm. Since the diaphragm is a muscle, its function is limited to a contraction and a relaxation of its muscle fibers. Yet the effects on the body from this simple function of the diaphragm allows the sustaining of the existence of life and function. This book details information on the many ways the diaphragm function plays a very crucial role in the support and existence of life. The diaphragm is that important of a skeletal muscle such that it is the only skeletal muscle controlled by both the autonomic (involuntary, unconscious) and somatic (voluntary, conscious) nervous system. These systems work together to maintain a continuously working respiratory system by the influence of their control and regulation of the diaphragm. This combination of influence provides the body with the capability of generating and maintaining a relatively continuous in flow of air containing life giving oxygen and qi/chi for the body, as it is oxygen that we know to be a very crucial component for the production of energy in the body. This same combination of influence on the diaphragm, also gives the capability of generating and maintaining a relatively continuous out flow of air which is necessary for the removal of metabolic wastes that are created as a consequence of this energy production such as carbon dioxide.

The diaphragm being in many ways the most important skeletal muscle for the preservation of life is often the one most overlooked. In addition, this book explains how the diaphragm gives rise to a purpose for the heart and lungs as well as support brain function and that it is the diaphragm that should be called on for increased health, power, longevity, and spirituality. It also explains how the somatic or voluntary function of the diaphragm is one that has the potential to level the playing field for everyone, as the efficiency of the body is dependent upon its own oxygen availability which then has a direct effect on the energy availability in our bodies, which is directly controlled by the function of the diaphragm. There are also simple exercises detailed to perform for the strengthening practice of the diaphragm that does not require strenuous exercise that can be practiced just about anywhere as long as you bring your diaphragm with you, just kidding. These exercises, however, require the engagement of the somatic or voluntary conscious control to help maximize the function of the diaphragm. In its support with breathing maximizing the function of the diaphragm will not only make this muscle stronger but it will also help to maximize the intake of oxygen, maximize the movement of certain crucial fluids in the body as well as maximize removal of wastes predominately carbon dioxide helping to maintain a healthy normal pH of the blood while improving immune function.

Rasheem Northington is a United States Marine Corps (USMC) Veteran and he served 8 years in the Marine Corps. He received his Master's Degree in Adolescent Education in Chemistry and his Bachelor's Degree in Biochemistry from Hunter College in conjunction with receiving his Public School Teaching License. Rasheem also received his Associate's Degree in Occupational Studies Massage Therapy from New York College of Health Professionals. Math and Science have always piqued his interest. Rasheem teaches and tutors many subjects of Math and Science. He continues to study a myriad of Traditional

Chinese Medicine, making him familiar with the concepts of Qi or Chi, Yin and Yang, energy meridians and energy meridian points. Rasheem is a practitioner of Taoist Tai Chi Kung which incorporates the practices of T'ai Chi, Xing Yi Quan and Baguazhang. He has received certifications in Qi Gong, Yoga, Qi Gong Energy Facilitation, and had some training in Medical Qi Gong. Rasheem is very intrigued by Chemistry, Physics, the human body and how it functions.

His background in Biochemistry and practices of Qi Gong Stance Training which is also known as Static Training facilitated his realization of the power and influence of the diaphragm. This motivated Rasheem to investigate the diaphragm further in addition to him knowing how important breathing is. His greatest fascination has been in Biochemistry as he recognizes that the body displays its own intelligence facilitating strategic chemical actions in order to sustain life. This in conjunction with the power of the diaphragm leads him to believe that we are designed to live, stay alive and explore what an abundance of oxygen can afford us over our lifetime.

What makes this book so interesting is the fact that it applies to everyone in all walks of life, whether you are a breathing practitioner, athlete, live a sedentary lifestyle, have a stressful job, have a muscular diaphragm, this book is for you. It explains how breathing or the breath is important to life and that the control of the flow of this breath in itself, is controlled by the function of the diaphragm, and that this function of the diaphragm is under control by you, to a certain degree. It also talks about how the choice we have to perform a voluntary full engagement of the diaphragm gives us

the ability to maximize our oxygen input facilitating a positive influence on our health, power, and longevity which may correlate with greater physical, emotional, mental and spiritual well-being.

The Diaphragm: The Muscle Source of Life
by Rasheem J. Northington

To Capture a Heart
by Kayla Johnson

Derek the Duck
by Helen Ham

The Last Man? - Journey To New...
by Favian Segovia