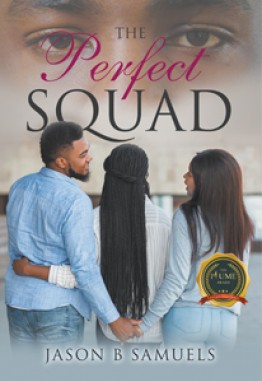 When prison life fails you… you can always count on your crew to have your back.

But, on the streets it’s a different story…

last forever. After meeting Xavier, Shellz, Tricks and Dice in prison they form a street

bond that couldn’t be broken. Avanti also learn that you can’t hold on to anything while

serving time and when his return to the streets causes chaos between Staci’s new love, a

deadly kingpin name Gutterman, Avanti leans on his crew to have his back. But… there

are secrets amongst the squad and Avanti’s first love, Staci. A secret that forces Avanti to

question his loyalty to all of them.

The Perfect Squad is based on two love stories into one. When one person love for his

crew and a woman is tested… what do you do? Enjoy the truth about urban life and

what’s it like to survive in the mean streets of Philly.

The Perfect Squad was inspired by Jason B Samuels beliefs,

feelings and personal incidents that transpired in his own life.

Realizing his gift to write became his focus after serving 16

His upbringing was a struggle after being raised by a single

in the city of Philly. No stranger to drugs and gun violence in

his city, Jason took to the streets and ended his own freedom

by getting into trouble. During his incarceration, he lost his

brother by the hands of a police officer, his daughter’s mother

to violence. It was then Jason needed a change. That’s when he found love for writing

poetry. Through short stories, poetry and novels, he mesmerized the depth of Urban

stories that many can relate to. The Perfect Squad is a serious street novel with a feeling

of love and street action that’ll make you gasp for more.

The Perfect Squad
by Jason Samuels

As soon as I began to read it, it was like watching a jaw dropping action packed movie. I’m already on chapter 3 and it hasn’t disappointed me yet. This is a must read.

Let me just say this once I started reading the first chapter I couldn’t put it down. The way it started off with the Thrill and Suspense wow. It’s a must read believe me ❤️

A WAR TIME LOG: DIARY OF A PRI...
by Peter William Sooby

Drowning in You
by Caroline Justice

Our Animal Friend
by Christal Bayard

My True Friend is a Ghost?
by Dell Bunny

The Last Man? - Journey To New...
by Favian Segovia

The Little Things
by Jaiden Calhoun