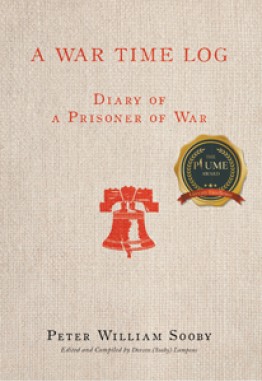 A WAR TIME LOG: DIARY OF A PRISONER OF WAR

During WWII, my father was a soldier in a reconnaissance unit. During a mission in Cologne, Germany, he was captured by the German Army, and held as a Prisoner Of War. He was not only held in terrible conditions, but also made to march hundreds of miles between various camps. Through all this, he managed to keep hidden a diary of his experiences during this time. Should the diary have been found, it would have cost him his life. Still, he took that chance.

His diary is a dated summary of all that he went through during his capture. In the diary, he made drawings of his surroundings and maps of both where he was captured and where he was marched across Europe. These were all done from memory. He also kept pictures and telegrams that he had collected during this time.

The war took a heavy toll on him, both physically and mentally. Already a small man, he left imprisonment at only 80 pounds. He struggled with his health for the remainder of his life. Although, he never really talked about the war, we knew the atrocities he had witnessed had affected him greatly. Mom said he endured night sweats frequently and nightmares for years after.

Despite the challenges from his past and continually failing health, my father pursued his passions and loved his family greatly until the time of his death. We lost my Father due to health complications resulting from the war in 1988, at the age of only 72. Our family lost a great man, father, and grandfather. His memory lives on in us today.

I am a daughter of a prisoner of war. My father was a quiet and stern man. I did not find out until later in life that he was a prisoner of war and that he had kept a secret diary. This is a record of his daily encounters during the war. Within these pages is insight into what happened during these times. Our family has always had a desire to share this with the world. We hope that you will enjoy learning about our father’s experiences as much as we have.

A WAR TIME LOG: DIARY OF A PRISONER OF WAR
by Peter William Sooby

When The Butterfly Met The Lad...
by K. S. Collier

Crime of Passion
by Tim Bentley

A Detailed Book of the Story o...
by Fredric Fey

Not Just for Me but for You
by Maurice Cade