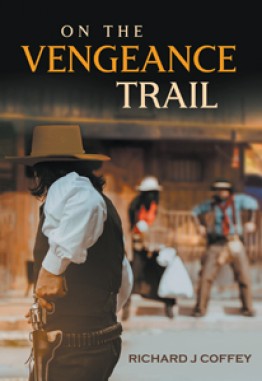 A homesteading family, consisting of a Mother, Father and their son Colt, have their quiet life interrupted with the arrival of a wounded bounty hunter, named Jeb. The mother removed two bullets and nurses him back to health. While recovering, he teaches the son the art of the fast draw with a six shooter. When the bounty hunter was fully recovered, he accompanied the son into town for supplies. On their return they find the cabin burnt, Mother dead and Father dying. Before the father takes his last breath, he describes the killers and gives the names he overheard. Colt, and the Bounty Hunter Jeb, team up, to go... On The Vengeance Trail.

I grew up on farms and a horse ranch, I drove taxi as a summer job. I spent my life working as a Tool and Die maker. I’ve taken a Locksmith course just because of my fascination with locks. I joined the Masonic Lodge as did my grandfather, father and son. I’m married to my trail riding partner for over 46 years. One daughter, one son and six grandchildren. I’ve read westerns for fifty some years and decided in retirement to write one of my own. I hope you enjoy reading it as much as I enjoyed writing it.

My second book is in the works.

On The Vengeance Trail
by Richard J Coffey

the story outline had a tender texture that grabbed your attention and would not let go. past books read chose read one page per day, saying that commenced doing so through chapter one. intriguing how the story line draws your attention, really convincing how one page leaves you in suspense so the one page per day was changed to one chapter per day. in all fairness must confess it was not my plan to do this being a system type person hold to my guns so to speak always was in the past one page reading close the cover tuck the book onto bookends until next day. this process was integrity that book was actually read. the Vengeance Trail demonstrated how to keep the readers attention adventure upon adventure capturing unexpected circumstances usually near end of each chapter. different portions of this book tears flowed unexpectedly just did. in summary very realistic for that time in the western world, certainly an incredible amount research was thought out before the story was written. favorite chapters not really a fav all xx chapters each having sincere drawing the reader to live several lives while reading. in closing look forward to book number two as book number one has left off with exceedingly exceptional experiences exhausting excitement to the end.

My first western and now I'm hooked! If they are all as good as this one, I'm a new western fan. I think it would make a great movie, the plot, the characters, the detail, the journey, all so amazing and I hope there is a second book coming. This read had me on the edge of my seat, I couldn't put it down. I read the whole thing in less then a week! Are you listening Taylor Sheridan?? 10/10 recommend for anyone - Lyv

This is a story of a young frontier homesteader, Colt Day, seeking to avenge the murder of his parents at the hands of three roaming outlaws. He is aided in this quest by a seasoned civil war veteran turned bounty hunter, Jeb, whom he met via similarly tragic circumstances. Their relationship of apprentice/mentor evolves over the course of time to one of friendship and ultimately business partnership. Under Jeb's tutelage, Colt is relentless in his pursuit of six gun quick draw mastery. This is a skill which is put to the test throughout and becomes emblematic of the "fast and permanent" system of frontier justice. As the heap of bad guys piles up, Colt and Jeb use the proceeds of their collected bounties to invest in land, cattle and investment properties. In sharp contrast to the harsh imagery of justice-at-the-end-of-a-barrel, the many examples of our hero's kindness and generosity endear him to the reader. The rough and tumble life on the open plains driving cattle and pursuing his murderous prey provides the backdrop to this story. But it is not the only one. Along the way, Colt and Jeb develop an enduring friendship with a tribe of native Comanches as well as with a troop of travelling gypsies. The blossoming romance with one of the Comanche maidens, Rainey, and their eventual betrothal marks the beginning of a more settled ranch-owner lifestyle. Despite the relative tranquility of home on the range, danger and trouble is never far away. And Colt and Jeb are always on alert. Can't wait for their next adventure. Stay tuned. Happy trails to you, until we meet again...

Vengeance Trail was a good read. I enjoyed the story, there were lots of interesting characters and the story keeps moving.

Western novels are a new genre for me, but I would expect that there would be lots of action, trail rides, stagecoaches, saloons, gun fits, encounters with Indigenous people and of course, ro

Set in the American west in the late 1800s this novel is fast-paced from the first chapter. When Colt and Jeb arrive back at the homestead after picking up supplies they return to the grizzly sight of Colt's Ma dead from a gunshot wound. Colt's father is also shot but is able to give the names and a description of the outlaws before he too dies from his wounds. This sets in motion the story of On The Vengeance Trail. At 19 years of age Colt is strong and a quick learner but doesn't have the experience and knowledge necessary to pursue the outlaws on his own. His new partner, Jeb, has the experience and skills needed for survival and he's willing to pass on what he knows as he accompanies Colt on his mission. The partnership is formed, and as the story unfolds we ride right beside them, cheering them along as they correct one injustice after another. The West, at this time, is not a safe place for honest homesteaders and trail blazers and it was an acceptable practice for people to take the law into their own hands when necessary. This story is not a slow meander along the western trail but a fast-paced adventure that flows smoothly from one encounter to another. Colt and Jeb are looking for the outlaws but they also want to explore. They are heading west to Santa Fe, The Alamo and the ocean. Along the way they befriend homesteaders who have been taken over by land-grabbers, ranchers who have had their cattle stolen by rustlers, Gypsies who haven't been accepted because of their different way of life and a Comanche tribe which plays an important role in their lives. With each encounter they set out to correct the wrongs that these honest people have endured. Colt sums it up when he says, "We want to make the West a better place for everyone." A classic good versus evil tale. I look forward to continuing the saga of Colt and Jeb as the series continues in Richard Coffey's next novel.

A LETTER FROM GRANDMA
by Cicely Santa

Let's Celebrate Holidays in Am...
by Riddhima Verma

Where Paint Goes: The art that...
by Larry Lewis

My True Friend is a Ghost?
by Dell Bunny