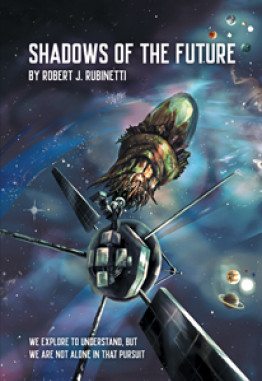 Shadows Of The Future

All sentient life searches the vastness of space and the mysteries it holds, some search to understand

their place in it, some to find where they are going, some obsessed to hold onto their dreams, and some

to prove themselves. It is the destiny and fate of the Stevenson family to unravel the universes greatest

an alien signal coming from a hidden star system 1.8 light years from Earth that only the probe can see.

Caught up in his father’s obsession, Daniel leaves for college making it his mission to decipher the alien

communication before the government can. Meanwhile, not far away a living alien probe searches deep

space on orders from its home world. In its search, it eventually receives a signal that can only be called

alien and a race begins towards a new age for humanity.

This is the beginning of the Stevenson family’s story and of humanities. How it ends remains shrouded

in the Shadows of The Future.

ROB RUBINETTI is no stranger to science or SYFI. He has lived life as a lover of both. As a young boy

growing up in age of space exploration unparalleled in human history, he wrote SYFI adventures stories

and performed plays in Miniature Theater of these stories in his hometown community center. As a

young man in school, he developed conceptual space flight science which only today are we beginning

He went on to obtain degrees in Mechanical and Nuclear Propulsion Engineering, but always retained his

passion for great story telling. Now returning to his passion he brings us the story of what is to come

for the human race as we explore the deepest reaches of space. How our need to explore the unknown

Shadows Of The Future
by Robert J. Rubinetti

A Moment In Time
by Adrian Cordero

The Clever Bunny : A Esperteza...
by Esmeraldo Silva

The Flying Bambino
by Natalie Tatick

The Girl with the Broken Face
by Shemar Shirley

The Sinner
by Kurieous Williams

THE INVISIBLE HANDS: A Politic...
by Mesfin Seyfu A.