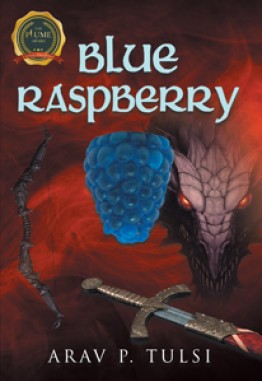 Atsune and her friend Liz, along with her Prince Charming, Leo, set off on

an adventure in the virtual world of Blue Raspberry, a VR MMO RPG style

Dungeon Crawler video game. Together they face many challenges, make

new friends and enemies, and become part of a Secret Guild, headed by

the creator of the game himself, whose goal is to maintain fairness in the

game. Over the course of several days, they become the highest-ranking

players in the game, and even find young love.

However, these friendships and young love is threatened when the game

glitches, causing a malfunction in the Brain-Computer Interface of one of

the players, causing him to forget the time he spent in the virtual world,

and all the relationships he forged.

Arav P. Tulsi was born and raised in the suburbs of Guyana, a small

and developed an interest in and eventually, a passion for computers,

more specifically, Brain-Computer Interfaces, and their potential for use in

Guyana, being a small agriculture-focused country, did not have the

best opportunities to pursue these interests, and so he applied to and

was accepted to the University of Central Florida, where he will study

computer science. Without school to keep him busy, he began writing

stories, poems and songs, and decided to share some of his pieces and his

passion with the world.

Declaration of COC National In...
by Olson Felix Twain

My Letter To You
by Dominick Flores-Querido

GOD WITH A RECOMPENCE
by Steven E-Jien Goh

The Unforgivable – If The Wall...
by Crystal Thomas

Born From Fire – A Collection...
by Charli

The End
by Andy Lewis

Till Death Do Us Part
by Melonie Shelton