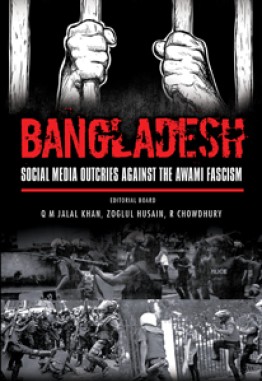 This is an edited collection of email comments, FB statuses, WhatsApp texts, and YouTube Video/Talk Show links, with reference to online articles and editorials mostly in the UK-based popular and patriotic outlet -- www.amardesh.co.uk -- providing a dissident, yet an authentic and authoritative narrative of the political scenario of today’s Bangladesh under the gag order of the pro-Indian Hasina-led Awami fascism for about fourteen years now. All contents are critical of the Indianized fascist Awami regime, which has banished free press since 2009. All forms of mass media, print or electronic, are in complete control of the fascist lackeys and loyalists, who, in their ludicrous and pathetic sycophancy, have sold their souls, as Dr Faustus of ancient German legend did, to the she-devil, the horribly ruling Hasina, who is an unprecedented ‘crime monster’ and ‘mother of all mafias,’ as critics would aptly describe her. Given the Hindutva-impregnated Modi’s immense control and influence on Hasina as she continues to impose her heinous agenda on the Bangladeshi nation, she may be said to have been completely ‘Modi-fied’. At the head of a deeply and densely RAW-infiltrated rogue regime, Hasina is overly ‘wived’ by the ‘husband’ that lies in the highly communal, fanatical and fundamentalist Hindutva India, which has become a Muslim “kabaristan” (graveyard), as Arundhati Roy would like to put it. Freedom of expression being conspicuous by its absence in the fascistically Awami controlled Bangladesh, no independent or neutrally-minded patriotic critics, journalists, observers, and analysts can write or talk in the mainstream media, which is/are off limits to them. They have no choice but to take to social media and that is also only from abroad, their native country being a place of beastly bondage and brutality under the grip of ‘gopal’ and ‘gestapo’ Hasina police. The authors of the text material and the speakers on the videos are as brave and brilliant as they are morally upright and well-intentioned in constantly exposing and bugging the Hindutva-infected evil tyrant ‘Hazrat’ Horrible Hyena Hasina and her Awami gangs and goons. Critics and commentators intend to stop her and her surrounding thugs in the party as well as the family dynasty from committing further crimes and criminal misdeeds in terms of widespread looting and plundering, massive election rigging, and overwhelming oppression and repression unleashed on the popular political opposition for years. She perpetrated massacres (on BDR, Jamaat and Hefazat), indiscriminate killings, abductions, mass imprisonment, and millions of court cases on more than 3.5 million opponents. Here are some of the recent publications protesting the indescribably horrific Hasina and the myriads of her horrendous misdeeds and mischiefs:

4. Bangladesh in Bondage: Tarique Rahman and Other Essays (Palgrave, 2021)

8. Bangladesh Divided: Reflections on a Corrupt Police and Prison State (PL, 2019), and

FROM BLACK TO BLUE
by Ed Cook

DEAL WITH IT
by Krystal Jean

The Math Pals
by Ashley Biegel

Living in a Strange Home
by Jessie Cetoute

A Walk in the Woods
by Lisa Musall

I AM ME
by Karis White