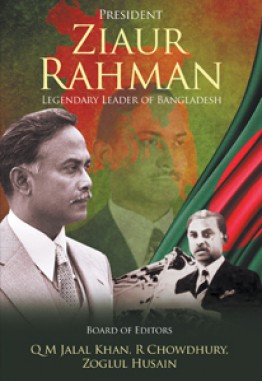 President Ziaur Rahman holds a unique distinction to make the historic declaration of the Independence of Bangladesh. He then led the glorious liberation war to victory in 1971, and then became the maker of modern Bangladesh in 1975-1981. He succeeded where Sheikh Mujibur Rahman failed, both as a political leader and as an administrator. In view of his crucial role at the time of the creation of Bangladesh and thereafter, President Zia was perhaps the most phenomenally popular figure of his country. His short life of forty-five years was like an intense flare of incandescent light. Even after forty-two years since his assassination by some deviant army officers, with Indian instigation and insinuation, Zia remains irreplaceable; his void unfillable. His character, nobility and dignity could perhaps be matched only by his wife, the great and glorious Begum Khaleda Zia, who would later be a three-time Prime Minister.

Both being the most famed and famous, both are/were almost equally legendary not only in their amazing and enormous popularity but also in their achievements and their sacrifice for the cause of the nation. Beside the devilish and dastardly actions of torture and terror by Sheikh Hasina and her corrupt-to-the-core fascist regime, Zia’s and Begum Zia’s accomplishments, together with their sufferings, stand out as bright as the solar shine of the day. In contrast with Hasina’s politics of destruction, oppression and repression, Zia’s and Begum Zia’s patriotic deeds and ideals continue to remain in the limelight as William Blake’s tiger “burning bright/In the forests of the night.”

President Zia saved Bangladesh at least twice. He rescued the nation by making the clarion call for the independence of Bangladesh on 26 March 1971, when the political leadership failed to respond to the trust the people reposed on them. The declaration was followed by Zia’s role as an effective organizer of war and a liberation war hero. The second time was in early November 1975, when the nation plunged into chaos and confusion by the India-instigated conspiracy crushed by the army-people uprising. A group of patriotic soldiers rescued General Zia from custody and restored his authority.

He rose to the occasion to save the nation during this crisis time.

Zia’s stewardship and statesmanship grew through the years of his rule and professional career. He was a successful sector commander, deputy chief of the army, chief of the army, and, finally, the most successful president with a track record of unprecedented contributions. He was a “large, sweet soul” and “the sweetest, wisest soul of all [our] days and lands,” as President Abraham Lincoln was to American poet Walt Whitman. Like Lincoln, who was also assassinated at the age of 56, following a civil war, Zia also was, “The great star early droop’d. O powerful western fallen star!”

This book is a great collection of writings about a great President by a number of notable authors and scholars, who place President Zia highly in the annals of the country’s formation and political development. It is an effort to contribute to the nationalist narrative with accuracy and objectivity. Highly readable and worth reading, the volume is a landmark publication in the political history of Bangladesh that all concerned will find interesting and informative.

BETRAYED BY THE ONE I LOVE
by Monae Walker

The Girl So Misunderstood
by Dawn DeWitt