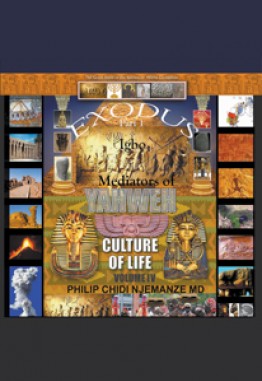 This Book: lgbo Mediators of Yahweh Culture of Life: volume IV, Exodus, Part 1, is the first accurate account of the path of the Exodus based on genetic, ethnolinguistic, paleoanthropologic and archeological scientific proof. The book builds on the theme of the book series: lgbo Mediators of Yahweh Culture of Life, that the lgbo are the Chosen People of God, the true Israelites (lgbo language: ! zara Eli, meaning 'you answered the Most High'). The question of who are the true Ancient Israelites has been settled with the science of population genetics. It has been shown conclusively that, the lgbo have L1 gene which is the Semite gene of Ancient Israelites. Human origins are traced through matrilineal genes, starting with the Eve gene called superhaplogroup LO. The three women who were theoretically wives of Shem, Ham and Japheth were L 1, L2, and L3 haplogroups, respectively. These genes are called Nilotic genes because of their origins along the Nile (lgbo language:mmiri niile, meaning 'all the waters'). The lgbo were the original inhabitants of ancient Egypt (lgbo language:a gQ Ya, a pa att,1 , meaning 'prays to God and carries out His instructions'), and were the Dynastic Pharaohs (lgbo language: e fere Qha, meaning 'your worship of the people').The lgbo were the earlier inhabitants of Nubia (Owere dialect lgbo language: ani ibo, meaning 'the land of the mediators', as priests that mediate between God and humanity for the remission of sin). The lgbo that speak the Owere dialect lived in Nubia or Upper Egypt while those that speak the Onitcha dialect lived in Lower Egypt. The lgbo Egyptians were conquered by the Turkic and ancestors of Arabs, and then enslaved in their own land , as Hebrews (lgbo language: Qha e bu t,1rt,1 t,1wa, meaning 'the people who bear the wickedness of the world'). On the way to the Promised Land of Canaan (lgbo language: oke Nna, meaning 'the allotment of the Father'), they were formally ordained a nation of priests by God and called lgbo (Onitcha dialect lgbo language: i gbo, meaning 'mediators or priests' between God and humanity for the remission of sin). The lgbo gene haplogroup is L 1 dating 150,000 to 240,000 years. The L2 are genes of the people of Black Southern Sudan region, which dates 100,000 to 150,000 years; and L3 dates 70,000 to 100,000 years and comprise all other black people. The genes of the white people are M and N, and are mutations of L3, that dates back 6,000 to 12,000 years. The locations of the sites from Egypt across Chad (lgbo language: Chi e du, meaning 'Almighty God leads'), Niger, Cameroon and finally Nigeria are to this day preserved in several caves and National parks. The Great Secrets of World Civilization and finally the burial Place of Moses have been revealed . Read this book and be part of this great history!

Academician Prince Dr Philip Chidi Njemanze M.D. was born in 1962 at Owerri, Imo State, Nigeria in the Njemanze Royal Dynasty. He is the Chairman, International Institutes of Advanced Research and Training, Chidicon Medical Centre, Owerri, Imo State, Nigeria. He is an Academician of the International Academy of Astronautics (IAA), the UNESCO body for all Space Research. He completed his medical education in Rostov State Medical Institute Rostov-on-Don in Russia, postgraduate training and fellowships in Neurosurgery, Neurology and Angiology at Klinikum Grosshadern, University of Munich, GUY's Hospital London, and Bowman Gray School of Medicine, North Carolina, USA. In 1995, he was selected by NASA as Principal Investigator to study the 'Brain in Space'.

Words of Wisdom : The Next Gen...
by Prynce Michael

My Notorious Life
by Keith Mabery

THE JOURNAL
by Jake Roe

The Path of the King
by I.M. Solomon

There Is No Luck In Success
by J.L. TORRES

THE GIRL IN THE MIRROR
by Tia Smee

The War Between Light and Dark
by Naomi Rose