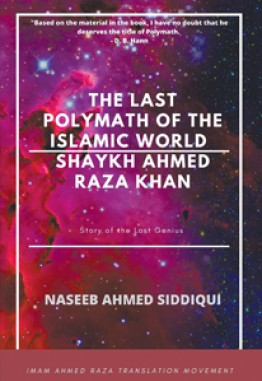 subcontinent. His following dominates the social religious domain of the Muslims of

several countries around the world including, especially India, Pakistan, Bangladesh,

the UK, Africa, and others. This book introduces Shaykh Ahmed Raza Khan as the

last polymath of the Islamic world by contextualizing his encyclopedic academic

contribution in the modern context. By venturing to write in more than 56 branches

and so on, therefore, representing the last polymath of the Islamic world. The book,

also, for the first time provides the known list of works in the English language

along with a synopsis. The book aims to de-construct the popular notion about his

changes the last century has gone through. This analogy highlights the importance

India. That how he single-handedly defended the Islamic creed from Wahabism

and the challenges posed by modern science. This book will be a paradigm shift in

understanding the Islamic intellectual history in the 20th century.

from the Institution of Engineers (I.E.I India) while working as the Deputy

Manager at Essar Projects India Limited. After this, he secured a Master by research

wingtip devices. Currently, he is enrolled as a Ph.D. student in Canada

at Ontario Tech University. The author has published original articles in different

fields in reputable journals like the International Journal of Aviation, Aeronautics,

Discourse, Philosophy of science and technology and IIUM Journal of Religion and

and the IJAS conference, Harvard, The USA.

The Three Heroes of The Rainfo...
by Sydney Jean Kempin

Power To The People - Educate...
by Angela Walker

Naupaka: The Time with You
by Vincent Rivers

I Am Not The Hero - Stories f...
by Kody Schutter

Purpose: GET YOUR SHIT TOGETHE...
by Samuel Rinaldi