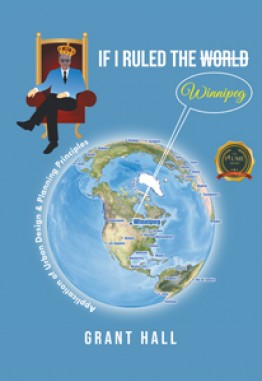 If I Ruled The World Winnipeg

This book is about a city’s current state versus its potential state. It examines the dynamic beginnings

The premise is that the author falls asleep in the forward of the book and wakes up in the epilogue,

potential were just a dream.

Find out how the development mistakes of Winnipeg parallel the lunacy of Monty Python, Get Smart

Even though the subject matter focuses on one city, the issues raised affect most cities to varying

degrees. Any reader with an interest in urban development, design or the twilight zone should find

the material relevant to their experiences.

Get To Know The Author

He grew up (sort of) in Winnipeg. In 1980 he had a frontal lobotomy and spent the last 40 years in

a high security mental asylum in Selkirk in a padded room to ensure his safety.

He was allowed visitors every Sunday from 1:00 PM – 3:00 PM although none ever showed up.

2019 and he immediately put all of his thoughts down to create this book. His drawings throughout

these pages indicate the level of artistry expected when one doesn’t have a complete brain.

Submitted by; Dr. This Won’t Hurt Much, Selkirk, MB.

Don’t listen to him. He doesn’t know what he is talking about. How could I be in that place when I

scored the overtime goal for the Jets Stanley Cup win in 1988. It’s a long to me ago and people don’t

seem to remember it, in fact the league doesn’t remember it. I chalk that up to the Mandela Effect.

If I Ruled The World Winnipeg
by Grant Hall

Building with the Broken Piece...
by Erica Rayford

A Word of Advice
by Carol Urena

The Truth Behind A Smile
by Genesis Nefertari Hernandez Banda

Expressions of a Misfit
by Kevin Williams aka Cowboykey

It’s My Time To Talk!
by Emmanuel Highsmith

For the Record - My Story Of T...
by Cameil D. Williams

Losing Myself: A collection of...
by Kathleen Lillian

Someplace Else
by S. Patrick Mooney