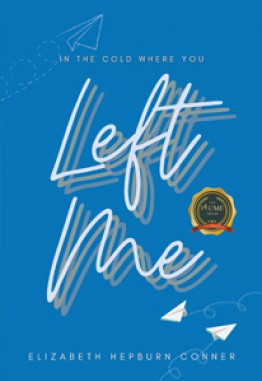 IN THE COLD WHERE YOU LEFT ME

A story of endearment, grace through pain, and learning to value

oneself to treasure another.

All Kyle knows is the frigid temperatures of Runestone, where he spent his entire life

exploring parts of him that remain buried inside. The pure-blooded Minnesotan sees

a crack through his icy ridges and attempts at a breakthrough. He pulls away from a

cyclic addiction to an intoxicating five-year relationship with a childhood sweetheart,

but gaslight and fond memories keep him crawling back. Turmoil seems to have no end

until he encounters hope in a Californian with deep cerulean eyes.

Liam, an idyllic splash of color from Orange County, transfers to Runestone University

in time to begin the Spring semester with a promise to his father, Mr. Alexander, of a

with the Minnesotan and is allured by his emerald eyes and starkly raven demeanor.

Still, Liam is plagued by a trauma that haunts him wherever he runs, resulting in Liam's

battles against addiction, anxiety, and depression.

As Liam and Kyle become enamored and endeavor in each other, their troubles seem to

his light. Mr. Alexander rushes to Liam's side and urges him back to Orange County,

leaving Kyle feeling left in the cold once again with no promise of Liam's return.

Commitment and faith in each other-and themselves-are cross-examined and tried.

Still, as Liam steps on the plane back to California, Kyle and Liam begin to learn that

the philosophy of felicity and serenity is forgiveness and love.

IN THE COLD WHERE YOU LEFT ME
by Elizabeth Hepburn Conner

Love Poems and other Stuff
by E. R. Vogel

Where Paint Goes: The art that...
by Larry Lewis

Living with Faith, Love and Ho...
by Dr. Alfreda Love

The Three Heroes of The Rainfo...
by Sydney Jean Kempin

The Flying Bambino
by Natalie Tatick

The Night Before Abby’s First...
by Dimineike Morton