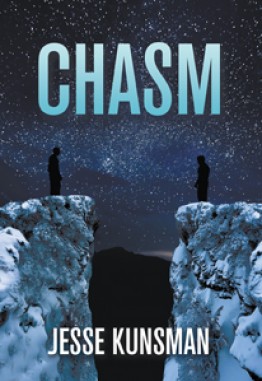 Chasm follows a seventeen-year-old man named Seth as he journeys, both

physically and psychologically, up Mt. Aculeotis. He battles through his version

things that he doesn’t agree with, ultimately making him lose the one person

who showed him a semblance of compassion. All the while he is dealing with

emotions and dastardly persons, some of whom are bent on killing him, or

worse. Now he has to decide how to handle an involvement with the devil,

Jesse Kunsman was born in New Tripoli, Pennsylvania, and is a sophomore in

high school with a passion for writing. Ever since a young age, the aspiration to

become an author was always in mind, and the constant development of this

ability leads to a riveting story of psychological dispute and romantic troubles.

when looked at under a lens, and present a big moral dilemma that he has

faced as a child, and he hopes many others who have as well will learn how to

cope with this novel, Chasm.

I thought this story was very good. Tons of plot twists and unexpected things happen. I would recommend this to everyone. Also I’m sad Tyrone died :(

JESUS LOVES YOU SO MUCH Colori...
by Toni Mcneil

Product of My Creation: The Ev...
by Maurice Cade

The Unforgivable – If The Wall...
by Crystal Thomas

In The Mind of the Forgotten
by Raymond Deshoum Copeland-Doherty

Upholding My Life : Adjusting...
by Curtish B. Taylor II

PENALTY FOR BETRAYAL
by Leeto Allen

STRANGE BUT TRUE
by Tom Callahan