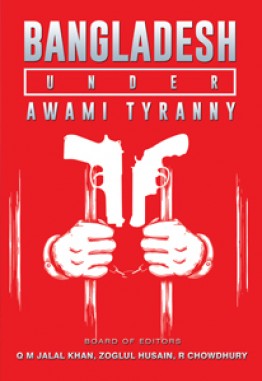 Bangladesh under the Hasina-led traumatically tyrannical and transgressive Awami

regime is a story of disaster and damnation. The fraud and fascist regime, a lackey of Indian

hegemonism and Hindutvaism, recklessly pursues a policy of death and destruction, at

least since 2009. The country used to be ruled with the same policy of elimination and

annihilation during the time of her father Sheikh Mujib in 1972-1975 as well. The miserable

condition led to his unlamented death and dismissal, to the joy and relief of the people of

all walks of life, including his own Awami party and the armed forces. Now the situation

under his daughter Sheikh Hasina is much worse. She is at the top of an Indian puppet

intellect and endless malice against the political opposition. The regime’s brutalities know

no bounds; its persecution and prosecution of dissent are unlimited; its foot soldiers are

deadlier than anything. They and their partisan police and RAB are brazenly emblazoned

by critics as ‘Mother of Mafias,’ is an illiberal embodiment of all mischiefs and misdeeds. A

fascist dictator, she is a tigress in human form, hungry for humongous accumulation of

autocratic and authoritarian power and control at the expense of freedom, independence,

sovereignty, and human rights. A viciously vindictive tyrant, again, backed by the

and journalists arrested, remanded, tortured, thrown behind bars, and even hanged;

and billions looted; and the poor committing suicide or dying of hunger. In the name

of development, mostly fake and fictitious, and dented and demented, floodgates to

elections rigged, drugs made available in plenty, institutions left to collapse, education to

fail, professionalism in professions going down the drains, transparency and accountability

going to the dogs, and thus Pandora’s box of ills and evils continuing to be released with

no stop in sight. This book is an attempt to capture only a portion of the dark tunnel of all swallowing

Awami tyranny and all its abysmal tentacles spreading across Bangladesh for

years and years with no end in sight.

DEATH IN THE SILENT CITY
by E.M. ALI

A Tribute
by Rae S.

How I Saved Satan's Daughter i...
by Tobi Yaza