Diversity in the Romance Novel Industry: Has there been any progress? 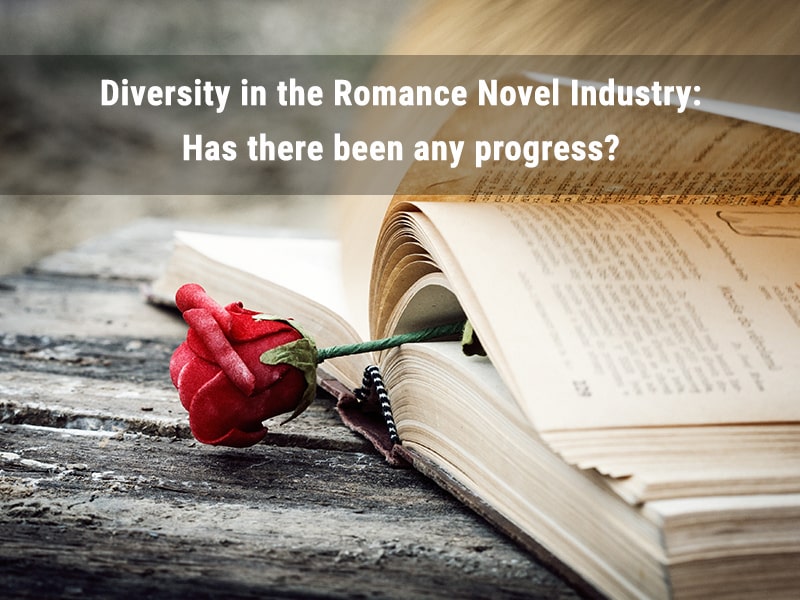 The romance novel industry is a very varied one, and people of different ethnicities are more than willing to try their hand at it. However, in the past few years, the romance novel community has noticed an unsettling trend that has been going unquestioned.

There is a lack of diversity in the romance novel industry. It seems that even though a good number of readers are interested in reading the works of a more racially diverse group of authors, there is a resistance to this. It is especially evident in some of the more established publishing houses.

According to a study that was conducted around 2016, a good number of these publishing houses did not regularly sign up authors of color. Their main response to this criticism, is that racially diverse books don’t normally sell well.

The publishing houses have made promises that they will try harder to diversify their author lineup. Now it’s 2021, and it is time to ask the question. Has there been any progress?

Here are some key facts on the matter.

Ever since this issue has come to light around 2016, various advocacy groups have voiced their support for the movement. A myriad of authors and readers have reached out to established publishing houses, espousing the need for more diversity in their published works.

In response to these requests a good number of publishing houses have made promises that they will “work on it”. These advocacy groups are the spearheads of this movement, and without their passion and help, this issue would never have come to light.

Well respected sites such as the Ripped Bodice were the first to bring this issue to light, and they have even invested time, resources and effort to start a publishing report on the subject.

Starting from 2016 to 2020, the site has kept tabs on the number of romance novels published by major publishers within the US each year, then they count the number of novels that were written by people of color.

The project was called “The Ripped Bodice State of Racial Diversity in Romance, and for the past five years have faithfully kept tabs on the numbers. Through these well-researched and tabulated statistics, we will be able to gauge whether or not there has been any progress in the past few years.

After the issue was brought to light, various publishing companies have made promises that they will work harder for more racial diversity in their book choices. According to the numbers, some companies have taken the necessary steps to address the current issue.

Kensington publishing is one of the most prolific when it comes to publishing the most books by authors of color. Despite their efforts, Kensington Assistant director Norma Perez-Hernandez has stated that there is still a long way to go. This is a refreshing admission, and shows Kensington Publishing’s commitment to racial diversity in the publishing industry.

As of 2020 only a few publishing houses such as Forever Romance, Kensington, Carina, and St. Martin’s could boast that 15% of their romance novels were racially diverse. These publishing houses have taken the necessary steps to promote change within the industry. However, we will need to push harder for even more dramatic change.

Last year was one of the most harrowing experiences humanity has collectively experienced. We went through a pandemic that had global ramifications. People lost jobs and hundreds of thousands of people lost their lives.

The situation was further compounded by the George Floyd murder, which was one of the most heinous acts in recent history. The murderous act soon had the whole country in an uproar, and caused protests and riots during a tumultuous time.

In response to the situation, HarperCollins tweeted “We Stand with all our colleagues, authors, readers, and partners who experience racism and oppression. Black Stories Matter, Black Lives Matter.” The publishing house was also able to release over a thousand romance titles in 2020, of those books around 8% were written by authors of color.

The Ripped Bodice project has been conducted for over half a decade, and the stats say it all. While there have been publishing houses that have taken the first steps to signing a more racially diverse group of authors, their response still lacks urgency or initiative.

Over five years have passed already, and there should be some drastic changes in the way things are done. Let’s face it, while there are a myriad of individuals and advocacy groups that are passionate about the issue, most publishing houses are still tentative about making meaningful changes,

Admittedly, there has been progress and some publishing houses such as Kensington, Forever Romance, Carina and St. Martin’s have made dramatic changes. However, not all publishing houses are following their examples. Some have made promises and public statements about racial diversity, and have yet to back it up with any form of action.

That being said, we should still remain optimistic on the issue. The Ripped Bodice project has already opened the doors, and has provided us with the necessary stats to gauge whether there is actually any progress. So it is up to us to keep the fight going. We should continue to demand positive change from publishing houses and other organizations in the publishing industry.

Although a good number of people have shown their support for publishing houses to be more racially diverse, it seems that there is still a lot room for improvement on that matter. So let’s all make a concerted effort, and try to make a visible change on how the publishing industry tackles the issue.

7 ISBN Facts That Self-Published Authors Should Be Aware of