Author A.D. Moreway's Interview on His Book, DELSAR: The Champion & The Hero 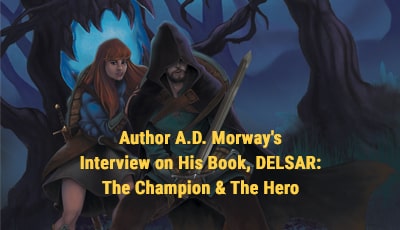 DELSAR: The Champion & The Hero, follows the story of Delsar, the great champion of Ithendar. He is tasked with protecting the queen of the kingdom and takes his duties seriously. Things go awry when the queen is murdered, and Delsar is forced into a life of exile and shame.

The kingdom is soon embroiled in a time of great unrest. In the midst of the chaos, a young girl named Elidria escapes her village to look for help. Her village is in danger of annihilation, and time is of the essence. She soon meets the champion, who has become disenchanted with life and acts in a more thuggish manner. Elidria sees past the façade and perceives the great warrior he is. She asks him to save her village from the dark forces that infest the land. However, the champion is a changed man, and there are great powers that don’t want the champion to come back to the kingdom.

Author A.D. Morway gives a great interview on his new book, DELSAR: The Champion & The Hero. The book tackles concepts such as failure, betrayal, and redemption, and takes you on a truly incredible adventure. Grab a copy and enjoy this epic now!

A.D: Thanks so much for having me it's lovely to meet you and fantastic to be here.

Host: I can't wait to hear about your book it sounds so, I know that you're really into star wars and sci-fi but you're grabbing the emotions of the world in a really personal way let's start with talking about the overall message of what your book is about.

A.D: Yes, thank you uh obviously we're coming out of a Covid-19 phase and lockdown phase and that really affected me emotionally and so, I wanted to write a story about a character who kind of isolated himself from the world and that really hurt him and so it's a story about solidarity and needing others because we're all going through something. Umm, whether it's related to the lockdown or something else in your life and it's very important to have other people in your life to help you through it and for you to help them through things

Host: What is the character experience throughout the solidarity?

A.D: um well, friendship that was kind of the big thing. He has gone six years without friends or including himself anywhere and just not trusting anyone throughout his life just because everybody betrayed him earlier in his life and so he doesn't think he needs anyone anymore.

Host: hmm, does this go back deeper than Covid? Are there some personal experiences in there, Morway?

A.D: Yes, there definitely are a few personal experiences. So, I feel, I think a lot of people can relate to the characters.

A.D: yes, I did. Uh, the main, there are two main characters. There's Delsar, who's obviously the title character and then, Elidria who's the secondary character and she's female. And I think Delsar, was kind of based off myself where I was a couple years ago and how I felt internally, and then Elidria is kind of more of my external appearance, how I pretended to be um but

Host: how you wanted people to see you

A.D: Exactly, exactly! Um and so they're kind of polar opposites and I because that I think they have a great chemistry together and have some witty banter throughout the book

Host: So, let's talk about the real life, the morals the dilemmas, the different you know emotions and things that they're going through

A.D: Sure, absolutely. Um, of course, the first one already mentioned is being alone in the world that's obviously a tough one. Another one is regret, there's a couple characters who live with a lot of regrets in the story and they keep striving so hard to make those regrets right by doing something in their life. That's better than what they did that was wrong. But, it just never works because they never experience forgiveness which is the big thing they need, to first of all forgive themselves and then move on from there

Host: Is there a faith element to this, is there is there a foundation of faith on this?

A.D: Yes, there definitely is. Um, I am a follower of Christ and I believe wholeheartedly in him and so, I did take a lot of inspiration from messages in the bible and some C.S. Lewis, I love C.S. Lewis, a lot of stuff from like that.

Host: It sounds like you're a person who takes advantage of opportunities you, you seem to be a really optimistic person. Um is that an important part of how you write and what the future of your characters are going to be? Are you an optimistic writer in that way?

A.D: Yes, I definitely am. Um, I like to think you know there's a plan somewhere going on. Um and sometimes things don't go according to plan but we'll get to the end eventually anyway. So, I may as well do the best we can, while we're here.

Host: It seems like you could replace a lot of the things that you're talking about in the book with our own personal experiences it seems like well they might be talking about regrets of this but we can all fill in the blank right

A.D: Yes, exactly that's what I was going for so it's a fantasy world, a world outside of this world, a world you can escape to if you read it but you're going to experience a lot of the same emotions and be able to connect and relate to a lot of the characters.

Host: Would you ultimately like for people to see Christ reflected in this book

A.D: Would I really, would I think uh that would be, you know wonderful people to see. Wow, this is what it's like to be truly forgiven to truly move past your regrets and you know just accept the free gift, that is grace.

Host: Absolutely, do you know where the characters are going to go as you're writing, or is this something that you kind of it unfolds as you're going along?

A.D: I'll be honest, Um, I had at least for the first book you know a beginning and an end and I knew who was going to live, I knew who was gonna die and I wrote it out the first draft but then when I got to the second draft things changed and I found characters in situations I didn't plan for them to be in and then they weren't able to make it out of there. So, it's very character driven and you know some things are twists from even myself just depending on the situations they find themselves in.

Host: You write from a very deep place, is there anything that's off-limits for you?

A.D: I'm willing to touch on certain subjects, um, because of where I know my family has come from and I think these are real world problems I'm okay to mention them because these are things that happen but I will not touch upon nudity or sex or and I will not have cursing in my books either

Host: That's a wonderful thing! I mean, while I tend to think that the target is young audience, it seems like, I mean, if we're going to talk about star wars it appeals to masses. Who are you targeting?

A.D: Um, those in need, specifically, those who are feeling alone. Um, like, I think teenagers especially, I think will enjoy this because I have a lot of younger friends who also are feeling very much alone and so. And, plus anyone who enjoys a good read, I know a couple of couples, who have read it and they've enjoyed it as well but definitely mostly those who kind of feel lost right now

Host: And what is the future, do you think this is going to be a series?

A.D: Yes, I do. I have at the moment four books planned for this particular series but, I would love to expand on this world I'm creating and have all sorts of spin-offs eventually

Host: I, you know, I would love to just kind of wrap up knowing a little bit more about you personally. Tell me more about who you are, where you came from, what's what, was your family like things like that?

A.D: Uh, my family grew up, uh Christian. I live in a very Christian home. Uh, we did a lot of church jumping because we found a lot of the denominations would have had these extra rules and such that weren't necessarily in the bible. Um, so I grew up a lot in that I eventually decided to join the military that's what I thought my calling was going to be, and it was working out great and then I developed a few autoimmune disorders out of nowhere which the doctors had probably brought upon by stress and  that was when I found myself in a deep darkness and this book has really helped me out of that and because I found a new but I think to be a new calling what I can do on the side of anything else I do is writing

Host: What a gift to be able to tap into something, had God's plan not worked out, sometimes we look back we go, God why, why would this over, You allow this awful thing, well because, I have something different for you.

Host: it's appreciating where we're at

A.D: right, I do and I think, he meant for those things to happen to me because it really helped with my character too, my own character, so..

A.D: wow, I can't think of a better note to end on that's, that's a big takeaway, A.D Morway DELSAR: The Champion & the Hero. Thank you so much, um and for those of, those that are listening on the radio where can we get a hold of you and buy the book?

A.D: Uh the book, it's on Amazon, Barnes, and Noble, pretty much any online store you can buy. It's not in stores yet, that's the next goal and if you want to reach me, I have a website admorewhite.com which you can get a hold of me as well or admoreway@gmail.com, that's a very simple way to get to me

Host: And then of course, at Writers Republic they can find you there as well

A.D: that place as well, yes

Host: Awesome! Thank you so much it was a joy speaking with you, keep it going. Let's catch up when we uh, get the second book out to the series

A.D: will do thanks so much for having me. Have a great day you, too 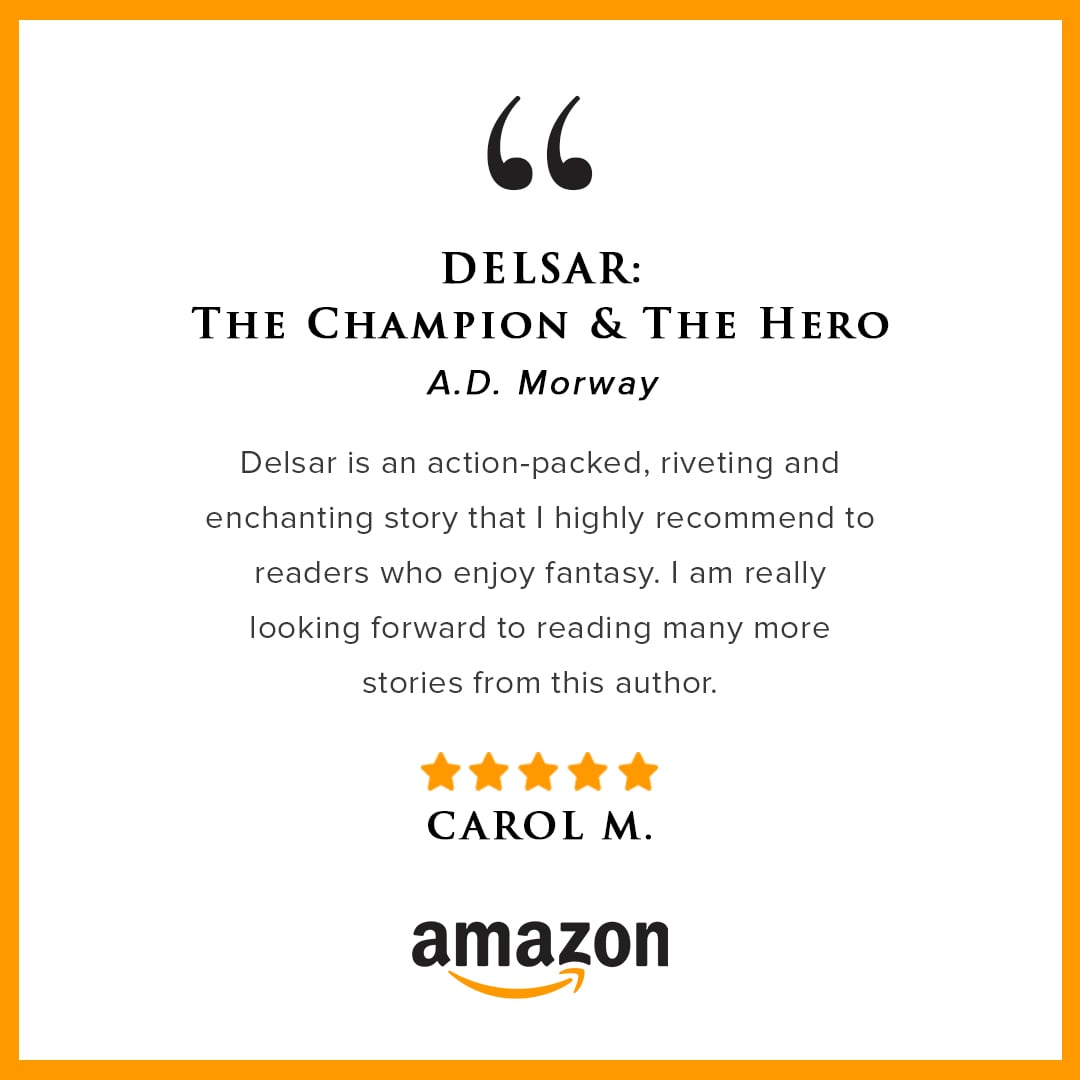 Key Benefits of Audiobooks for all Readers