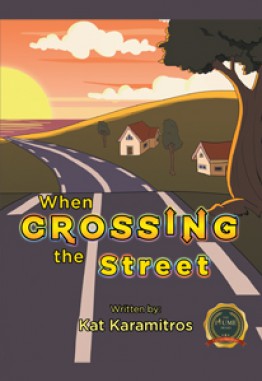 When Crossing the Street

Crossing the street is big business, and this adventure will prepare you for anything!

There will be tractors and submarines, astronauts and camels. Look left and right, high

and low. Can you find every critter and creature, truck and bug before you cross the

road? It’s going to be a busy day, but before you know it, it’ll be time to play!

Karamitros. A fun-filled read for little ones and grown-ups alike, this journey will keep

you on your toes, providing endless possibilities for imaginative minds to keep creating.

Kat Karamitros is a 25-year-old United States Marine and

professional musician. When she’s not wearing her uniform

or performing in concerts and parades all over the country,

She describes writing as her first love, a passion she maintains

alongside service to country.

When Crossing the Street is inspired by Kat’s childhood

memory, where she recalls she and her uncle composing an

outlandish list of characters, vehicles, and creatures to spy on

the street. Only when her imagination had been fully satisfied,

home. Kat originally wrote When Crossing the Street at age 12, for the uncle who

Kat is a native of Cedar Rapids, Iowa and currently resides in Port Royal, South Carolina.

She’ll never get too attached to one place, as home is wherever the Marine Corps takes

When Crossing the Street
by Kat Karamitros


Stretching the imagination of the everyday stroll!

Perfect for parents who need their littles to have an extra push to look both ways! As a parent, we thoroughly enjoyed the poetry and my little ones trying to guess the next words by what they see. Beautiful illustration for something we do everyday!

VIEW THROUGH THE SPECULUM : A...
by Judy Warrenton

My Name is Connor Ross
by Alexander Kubiak

Behind The Mask
by Jammie Lockett

Advent - The Caravan After The...
by Daniel Jimenez

A Word of Advice
by Carol Urena

The Adventures of Jawee and Ne...
by Thierry Raymond

The Red Reborn
by John Hendrix

Badge or Beast
by Bennie Watson