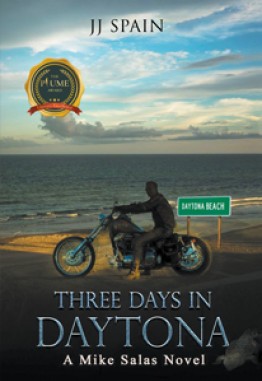 In book two of the Salas detective series

Detective Mike Salas has nothing on his mind except his girl, and fun in the sun, during his first trip to the Daytona Bike Rally.

On his ride there, Salas meets RJ, who is also en route, planning to bid a final farewell to an old friend during the Florida Rally.

The theft of RJ's motorcycle sets Salas in motion. As two worlds collide, the body count racks up, RJ finds himself targeted by his own club, and the fallout threatens to destroy Salas' much needed vacation.

Will they be able to retrieve RJ's stolen bike and the precious cargo he's stored in the saddle bags of his Harley?

Will Salas and RJ extract revenge and settle the score?

Will either of them survive Three Days in Daytona?

JJ Spain is a 25 year veteran of the American motorcycle rally experience, bringing the ride and biker's life to your fingertips.

Take the ride. Enjoy the rally.

Visit https://mikesalasnovels.com for updates on new releases and events.

Words of Wisdom : The Next Gen...
by Prynce Michael

The Presence, presents, of God...
by Taahir

Starting Over
by James Xu