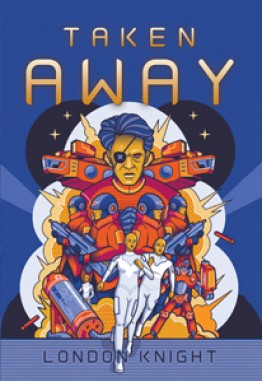 nuclear weapons. Most of the humans that remain live underground, in the caverns

of Mars. A small band of specially chosen soldiers is given a mission to reclaim Earth,

to see if it’s fit for colonization. They’ve trained their whole lives for this mission.

Still, nothing in the cosmos could possibly prepare them for what they are about to

The human brain can only fit so much stuff in it, so instead of learning a little bit

about a bunch of topics, they chose a bunch of soldiers and make them learn a

lot about a smaller number of topics. As a unit, this made them stronger... But if

someone died, that knowledge died with them.

People thought that meeting intelligent life would bring peace. They were wrong.

should not be flourishing human settlements. The squad encounters very bad and

dangerous circumstances and suddenly survival became the most requested need.

entertain and inspire through the power of action-packed, macabre storytelling. For

as long as he can remember, he has had an imagination as limitless as our universe.

adventurous stories infused with science fiction. In addition to his experiences, his

best friend has served as quite the inspiration throughout the last decade.

London Knight’s debut book is titled “Reincarnated in an Alien’s Body: Trapped on an

Alien version of our Own Universe.”

A huge risk-taker even in the face of seemingly insurmountable challenges, this

sci-fi lovers and people unfamiliar with the genre alike.

Taken Away
by London Knight

The Power of Poetry’s – Inspir...
by Tres Augustine Parker (The Red Noose)

My Heart in Pages
by Alyssa Longoria

Mirror Image – You Can Not Air...
by MJ Watson

Zigzags and Glow Sticks – a po...
by Aakriti Chaturvedi

DREAMS, NIGHTMARES, AND OTHER...
by MR. GRIMM

Under The Full Moon
by Da'vin Drummond