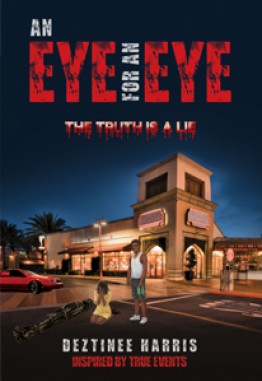 An eye for an eye the truth is a lie

In the streets there are only 3 things you need to succeed. Money,

Power, and Respect. Jaron had it all until he was murdered by a rival

but will she succeed before it’s too late? The police won’t help, the news

about it. Something isn’t right. There’s no where to run and nowhere

to hide. No one can be trusted so who do you turn to for help? Your

playing both sides. Someone’s hiding something and their watching

Monique’s every move. Will the killer strike once again?

Jaron’s son, Jason, is hanging on by a thread. He’s sinking slowly and

her son before he loses himself or will the mission fail? Can Monique

even save herself after dealing with such a loss? Time’s ticking and

soon there may be no more left.

A life for a life, a bullet for a bullet and an eye for an eye. Who knew a

date night turned bloody would change everything? Better watch your

back if you want to survive.

There’s two sides to every story and the truth isn’t what it seems. The

question everyone wants to know is... what happened to Jaron?

Led Astray - The Wisdom of Tru...
by Dio Santos

The Adventures of Peter the Pe...
by Steven Bailey

The Story Of Jessie Mae - Her...
by Lenore G. Dangerfield

An eye for an eye the truth is...
by Deztinee Harris

Rising from the inside out
by Marisa Turner

Valarie the Wizard: A Fairy Ta...
by Valarie Ann Segovia