How Will the COVID Vaccine Affect the Publishing World? 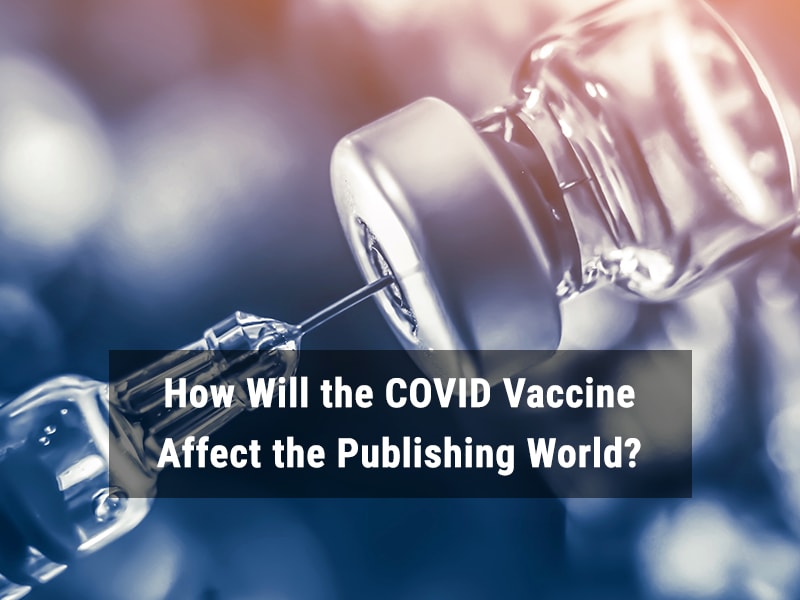 In the past few months the world reeled from the effects of the COVID-19 pandemic. What started out as minor infections became widespread all over the world. In fear of further infection, most of the civilized world went into lockdown.

This soon caused the global economy to take a drastic nosedive. Businesses closed and jobs were lost within a span of months.

The publishing industry is amongst the industries that suffered. In all this chaos, books and publishing is the last thing on people’s minds.

Incredibly, after almost a year of waiting a vaccine for the virus is within reach. With the promise of going back to normal waiting around the corner, publishers and authors alike are wondering.

If there is one aspect of the publishing industry that has been affected the most, it is the bookstores. Due to the lockdown, bookstores were forced to close their doors for months.

The larger and more established bookstores were able to survive, however a good number of small and independent bookstores were forced to stop their operations for good.

Some bookstores closed their physical stores and focused on their online stores instead. As a whole though there have been a lot of bookstore casualties due to the pandemic.

Luckily, there have been fundraisers that have helped smaller bookstores stay afloat during these dire times.

Should a vaccine be finalized and distributed worldwide, this will definitely have positive effects on a multitude of bookstores.

Traditional publishing has always been considered as the most stable and established form of publishing. Would be authors vie for a chance to work with them, and their book publishing and marketing is usually top class and well-funded.

However, in the past few months a good number of publishing houses have had to make concessions due to the pandemic. Book release dates were moved, and book deliveries were delayed because essential items such as foods, medicine and clothes were prioritized.

In the first stages of the pandemic, book sales were up for many publishing houses because many readers were stocking up on essential books such as medical books, educational workbooks, games and other activities.

However, due to the loss of key bookselling events such as book fairs and book signings, a lot of expected profits were also swept off the table. It is safe to say that should a vaccine be finalized and mass produced, a majority of traditional publishers will be relieved.

Like its traditional counterparts, self-publishing has not been too damaged by the pandemic. Production wise, most self-publishing companies do their work online, and they could survive not having a physical office.

Self-publishing authors don’t really rely on bookstores to sell their works, so bookstores closing down are not really an issue either.

However, due to the financial instability of the COVID-19 pandemic, some writers would be hesitant to invest in self-publishing a book.

Overall, should a vaccine be finalized and be ready for distribution many a writer would be more willing to self-publish their works.

Aside from bookstores, book fairs have been hit hard by the pandemic. As a consequence of the lockdowns and restrictions a lot of book fairs had to be cancelled, or rescheduled.

Due to the uncertainty of the pandemic, there was no guarantee that these rescheduled book fairs will also take place.

This makes the news of a vaccine a very welcome one. Should the vaccine prove successful, and help slow the advance of the virus, we could expect book fairs to make a comeback in the near future.

However, even with the help of a vaccine, there is still a great threat of infection, so book fairs should still implement COVID-19 protocols.

There are many aspects of the publishing industry, and the COVID pandemic has affected each and every one of them. The extent of these effects varies though, and the effects of a vaccine is also varied.

What’s important to remember though, is that even with a vaccine, it will take some time for the entire publishing industry to get back on its feet. So in the meantime, we will have to be patient and vigilant.

Types of Publishing Companies Every Newbie Writer Should Know About

7 Reasons to Take the Self-Publishing Route