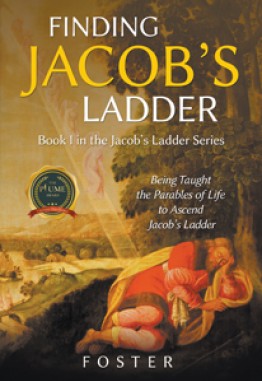 Book I in Ascending Jacob's Ladder

In many ways, this book is a duplicate of the book that I have written called Ask, Knock, Seek and Find. Besides the events that I have shown that were dreamt that transpired, which had taken place since its original manuscript was written. I have also integrated the dream definitions directly into this book, which is named. Finding Jacob's Ladder.

Out of the three Books in this series of which are being published simultaneously, this book sets the stage for the following parables. Dreams have been given to man to instruct them or even forewarn them of events to come. I have also found that they are fantastic parables allowing one willing to pay heed and understanding the Spirit of Christ and that of the Holy Ghost. Giving meaning to the supernal comprehension that the spirit dictates as the parable means to them in their lives.

Dreams and visions can show each person their possible future. The varied meanings of each of the interpreted dreams. If they haven't already taken place or when they do take place in the future. Dreams and visions are revelation given to man by our Heavenly Father! "Ensuring they are correctly translated."

We know the time of the Lord is at hand, and those that assume that they will have many more years to repent are only not seeing the signs in the heavens but are not reading their scriptures. Sadly, they will be mistaken when these devastations occur, which are only a description of a couple of these devastating destructions that will take place on earth as it rolls to and fro. It will be from these devastations that occur to the saints and all those who live within that region that will initiate the remainder of the world events prophesied to occur.

Pay great heed to the words of Isaiah, for Nephi himself told us that Isaiah's writings were meant for our day. That through dreams, God will still give warnings and guidance. As long as we seek out the Holy Ghost for the correct Interpretation of those dreams and/or visions, we are humbly requesting of our Heavenly Father for our families and ourselves, knowing that these revelations were meant for you and your own family personally. Understanding that your dreams or visions will never go against the counsel of our prophet or apostles.

There is no need for me to say much more, for within these three Books, this being the first. You will have a far greater understanding of myself as the writer or merely the pen. Then what a few more lines about myself could illustrate.

Above all, the Love I have for our Heavenly Father, the Lord our Savior Jesus Christ, and the Holy Ghost is paramount.

The Tales of Nalor
by Jack Crawford

Quotes to an Honest and Better...
by Dr. Rosetta Stephens

Me, Myself, & I
by Justise Curry

The Whirl Wind Man: The First-...
by John Pavon

ROMANS 8:28 The Battle of The...
by Gary Anthony Tillman